Darius Kinsey (1869-1945) was a photographer active in western Washington State from 1890 to 1940. He is best known for his large-format images of loggers and all phases of the region's lumber industry. In 1906, the couple moved to Seattle. Darius gave up studio work and focused instead on the lumber industry and scenic photography. Tabitha developed the negatives and made the prints, which were sent back to the logging camps and sold to the loggers. 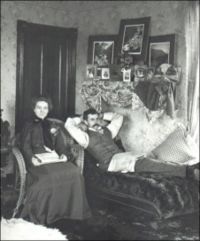 More than 4,700 negatives and 600 prints make up a valuable Northwest legacy whose fame has reached as far as Japan. The photographs have been published in many historical reference books, used on the covers of novels, shown in the Museum of Modern Art in New York and exhibited in the company of some of America's greatest photographers such as Timothy O'Sullivan, William Henry Jackson and Eadweard Muybridge.

Kinsey saw the woods as a great cathedral; the feathery grain of tree bark, dappled forest light, the sheen on a locomotive and the grime on a logger's shirt are all visible in amazing detail and give the viewer an immediate sense of the atmosphere of the virgin forest.

Crescent Camp No. 1, 1936
Kinsey's photographs were not intended as works of art but as records of the people, places and industries of the time.

Among his most popular prints are scenes from all phases of the logging industry, from the first cut of a giant cedar, to the skid roads, saw mills, lumber yards and finally to the shipping ports.

For Kinsey, finding the perfect shot sometimes meant dodging avalanches, crossing crevasses and jumping over rattlesnakes. On family outings, he was known to jump out of the car on a moment’s notice, set up his equipment on the shoulder of the road or disappear up a trail.